Today I am going to share with you an easy way of making Keerai Masiyal (Tamil Brahmin style-no onion no garlic recipe) using the pressure cooker. Though I have prepared this keerai masiyal with arai keerai, you can prepare the same recipe by substituting arai keerai with mulai keerai or siru keerai or spinach or paruppu keerai. 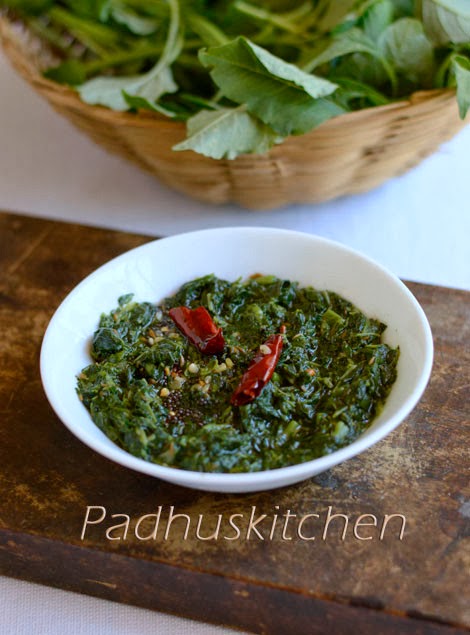 How to make Keerai Masiyal

Wash keerai/greens well at least 2 times and chop it finely. The nutrients in the greens will be lost if you wash it after chopping it, so wash well and then chop. For arai keerai, you can use the tender stems also.

Take a pressure pan or a small pressure cooker, add the chopped greens, a tsp of cumin seeds and just 1/4 cup of water. Pressure cook in medium flame for 1 whistle and switch it off.
After 5 minutes, open the cooker (if the pressure has not subsided, pour a cup of water over the cooker and then open the cooker after 2 minutes) mash the keerai well with a keerai masher or potato masher and add salt to taste. I personally do not like blending the keerai to a fine paste but if you prefer, you can do that. Strain excess water if any (If required you can add 1/2 tsp of rice flour for thickening along with keerai).
Heat a tsp of oil, add mustard seeds, when it splutters, add urad dal, red chilli and hing. When dal turns golden brown, pour the seasoning on the keerai and mix well.
This keerai masiyal can be had as a side dish for rice.It can also be had mixed with rice topped with a tsp of ghee. When I was young, my mother used to give me keerai sadam by mixing this masiyal with rice and ghee. Children will love it. Potato curry goes well with this keerai sadam.

Tips to retain the green color in keerai

1.In the method given above the keerai retains its green color.(see picture above) I did this masiyal in a small pressure cooker only.

2.Add a pinch of sugar while cooking the keerai.

Note -If you do not have a pressure pan, you can cook the keerai in a pan or kadai as I have done for my Mulai Keerai Masiyal Recipe
If you found this post useful, I would really love it if you pin it or share it with your Facebook fans or Twitter followers or Google+ circles today. All it takes is a simple click on the “pin it” “like,” “share,” “tweet,” or Google+ buttons below the post. It will keep me motivated. Thank  you!