Sodhi also known as Sodhi Kuzhambu is a very special dish from Tirunelveli District (Nellai) in Tamil Nadu. It is a vegetable stew prepared with mixed vegetables and coconut milk. Sodhi saapadu, a Special lunch with a combination of sodhi, rice, ginger chutney, potato curry and papads are served in their marriages. It is also called Mappillai sodhi. I got this recipe from a friend and prepared it and clicked it long time back but found time to post it only now. It is a great combo with idiyappam and appam also. Today we will learn how to make Tirunelveli sodhi following this easy recipe. 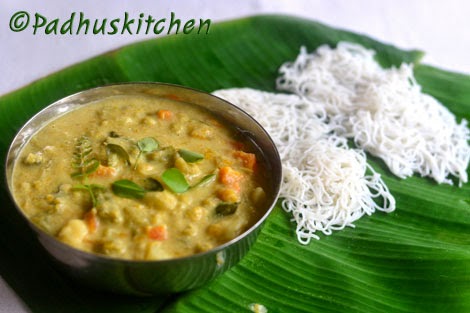 
Chop onion and garlic and keep it aside.

Cut all the other vegetables into medium sized pieces. Total vegetables should be around 4 cups excluding peas.

Extract thin and thick coconut milk and keep it ready. Check out how to extract coconut milk.

Grind coconut, fried gram, green chilli and cumin seeds to a smooth paste and keep it aside.


Take a pan/pressure cooker, add all the vegetables including peas.

Heat oil, add mustard seeds, when it splutters, add curry leaves and pour it over the sodhi.