Soya Kheema Sandwich is a quick and delicious breakfast sandwich made with soya chunks/meal maker. It is rich in protein and makes a filling breakfast. Today we will learn how to make soya nuggets sandwich following this easy recipe with step wise pictures. 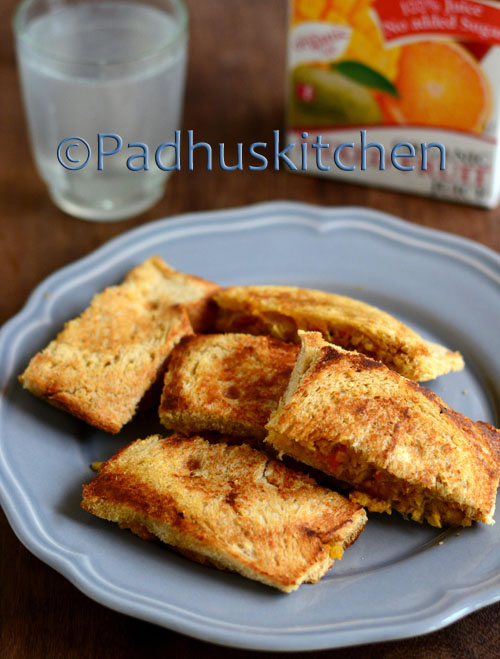 For the soya keema filling

Grind/blend it in a mixer just for a second. Soya keema is now ready.

Add coarsely ground soya chunks and cook on medium heat until all the moisture evaporates and the mixture becomes dry. Our soya keema filling/ stuffing is ready.

Grease the toaster with butter. Cut the corners of the bread slices, place 1-2 tbsp of soya keema masala on a bread slice, close it with another bread slice and toast until golden brown. You can apply butter on the outside of the bread slices also if desired. If you do not have a toaster, you can toast it on tawa also.

Repeat the same process for the rest of the bread slices. You do not need any side dish for this. It tastes good as such. As this sandwich is rich in protein, it is good for growing children.

The stuffing is the same as I used for soya keema paratha. So in case, if you have leftover stuffing, you can make use of it by making this sandwich or paratha or soya keema rolls.
Note – You can use soya granules in place of soya chunks. Follow the instructions on the packet for cooking the soya granules.
Don’t forget to hit the +1, Share button, Tweet button, Pin it button, if you like the post. You can follow us on Google Plus, Pinterest, Twitter, Facebook  and Subscribe to RSS Feed to receive latest updates.